Hey gang! I know I’ve really slacked off on the blog posts lately, I will get all caught up soon!

Just real quick this morning I wanted to post pics from the before & after of the 30 Day Abs Challenge that I just finished this week.

I’ll be honest, I don’t see a lot of difference in the pictures! Although I do see a bit more definition. My overall rating of the “get ripped abs in 30 days” is that I wouldn’t exactly call my abs ripped at this point, so kind of false advertising. I did every work out, never skipped a day. And in the end I just didn’t see as much difference as I was hoping to.

However, on the side view, I see tremendous difference – although I’m going to credit some of that to simple “bloatyness” as I believe the before picture was taken in the evening, after dinner and after a full day of eating, whereas the after picture was taken at 7:00 a.m. before eating anything save for a few sips of coffee. But you can see a bit of muscle definition that was clearly not there before.

Side view, before abs challenge

Side view, after abs challenge

Saturday I took my best friend Terri out for brunch at The Breakfast Club in Farmington for a little treat before we went for the final fittings on our dresses for her wedding.

It is so nice to spend time with Terri, the two of us just really click together like sisters and it is a great time every time I see her! The Breakfast Club has such good food, it is a favorite spot of mine and Jim’s. I was very excited to take Terri there and introduce her to this place. She loved it also and suggested that sometime Jim and I should meet her and Scott there for breakfast, which of course is a great idea! I will never pass up any opportunity to enjoy the sumptuous food at this place!

I had made a little book for Terri called “Before the I Do” which was a keepsake of pictures from her bridal shower and her bachelorette party. She really liked it and it made me so happy to do something nice for her and to see that it meant a lot to her.

Once we finished up with brunch, we headed over to David’s Bridal to have our final fitting of our dresses for her wedding. This was one of the challenges I had been worried about. Part of my weight loss plan was that once I took that dress in for the first fitting I would need to switch gears from weight loss, into maintenance mode; so it would still fit me for the wedding. So far it’s been about a month since I had taken it in for alterations and when I went back Saturday it fit me like a glove! 🙂 So now I just have to maintain that for 3 more weeks until the wedding and everything will be perfect.

After that, I will need to a new plan. I haven’t decided yet if I want to stay in maintenance or perhaps lose a few pounds. I am only about 2 and half pounds away from the second goal weight I had set for myself. First goal was 130 lbs. in time for our cruise in March. I met that goal the week before we left for the cruise. Second goal became to lose another ten and get down to 120. I didn’t really put a time frame on that one but was hoping maybe I could do it in time for the wedding. I still might be able to pull that off, being so close now, but I’m trying to hold really steady weight so the fit of that dress doesn’t change.

Ok so here we go with some pictures! If you recall, in one of my earlier posts I used a picture of the day I initially tried on this dress last November as my official “Before” photo. So now it is time to unveil the “After” photos! 🙂

The “After” pic June 2013, down 23 lbs from the initial purchase of this dress in November.

Showing off my “Hot runner’s legs” as my bestie calls them!

And here is the side by side Before & After: 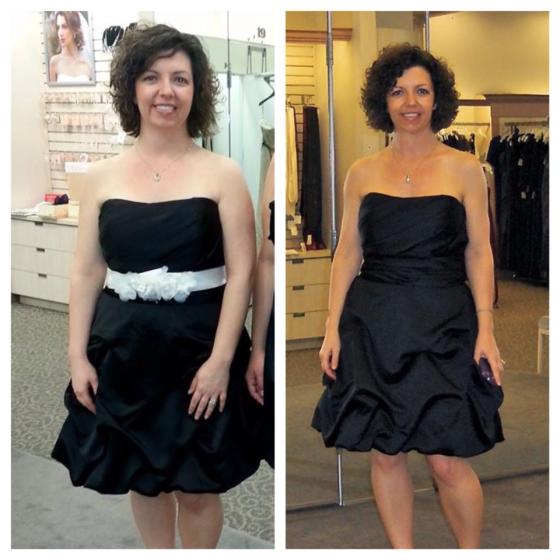 It is really amazing what 8 months of hard work and dedication can do! The funny thing is while I can see a big difference in my face, shoulders and arms, and a bit of slimming down and a lot of toning up in my legs…in these pictures you really can’t even see the difference in my midsection. In actuality my waist is considerably smaller now than it used to be. You can tell in this pic of Terri and I that I finally have a waistline! Yay me!! 🙂

Debb V - author of Counting my cookies...And eating them too!

Because there is a middle between the before and after.

Running a mile a day and other minimalistic ideas

Thoughts and experiences on a personal road to fitness

When I have my way with you, I have words.

It's me, meandering through life!

Turns out, it's not the hardest part.

Put these methods into action and start losing weight now

Unleash The Lion Within!

Habits, purpose and a little bit of zen.